Back to Blog
MoorepayUncategorizedSmartphones: good for business or good for wasting time?

Smartphones: good for business or good for wasting time?

A US survey of people who use smartphones at work has revealed 65% of employees admit to using their phones for personal messaging and social media during working hours.

With figures this shocking it’s a matter that’s difficult to ignore – so are the smartphones you provide your employees actually beneficial for your business? Or are you losing productivity as a result?

Phones at work – the business case

The use of mobile phones has become so ingrained in our culture it would be almost impossible to function as a business without them. Employees can pick up emails and messages wherever they are, and while this isn’t always good for a healthy work/life balance, it’s had a huge impact on the growth in remote working.

Appointments and key dates and times can be shared among groups and updated in real time, and GPS apps can ensure your team get to where they’re supposed to be.

The slim devices contain hundreds of times more information than you could ever cram into a trusty old Filofax, and there’s obviously the ability to make and receive calls from wherever you are (signal permitting).

When it comes to security, company-issued mobile phones can be encrypted to protect sensitive or confidential data in the event of loss or theft, and it’s also possible to block the use of some games and apps.

But even if employees have a work phone with in-built restrictions, there’s a very good possibility they’ll also have their own. And it’s highly unlikely that those employees who don’t have company-issued phones won’t have one of their own that they bring into work in their bag or pocket.

With such ubiquitous use, it’s no surprise that employers are reporting such a huge dip in productivity.

While being available 24/7 has its benefits for business, it also means your employees are used to responding to personal text messages, emails, social media messages or game updates immediately.

Phones at work – the facts

CareerBuilder’s survey found that over 80% of employees had a smart phone, and more than 80% of those keep their phone in sight during work hours.

Although only 10% of these employees admit their phone is a major distraction and a factor in decreasing their productivity, over two-thirds said they use it at least five or six times a day while working.

Most of those surveyed (over 65%) said they don’t have work email on their phone.

So what’s so important that it can’t wait until work is over? 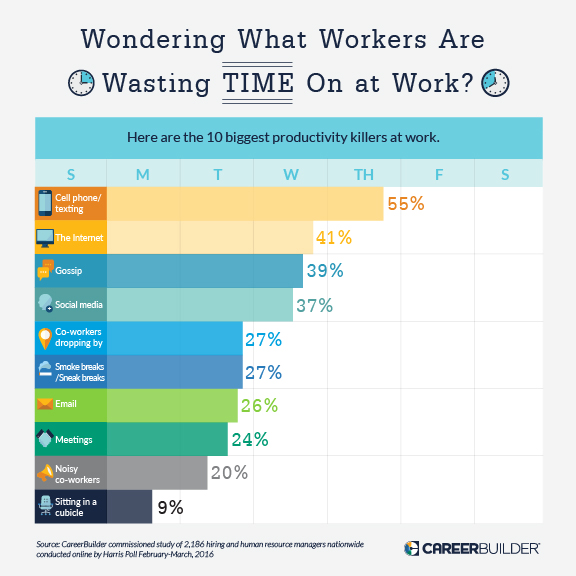 Unsurprisingly, of those workers with a smartphone the majority said they spend time on personal messaging and social media during working hours, with 65% admitting to in-work chat. But over half also check the weather, 44% catch up on the news and 24% of employees play games during work hours.

The cost of lower productivity

Obviously, such widespread use comes at a huge cost to the employer. As well as the fall in productivity, such distractions can have a dramatic impact on the company in terms of reduced quality of work and missed deadlines.

Repeat offenders won’t be going unnoticed and their colleagues will be left to pick up the slack – resulting in lower morale and greater resentment.

And the end result will of course be a loss of customers and revenue.

So what can you do about it?

Many companies already restrict the use of personal smartphones by having their employees switch them off during working hours, and some employers provide lockers or locked drawers for their employees to deposit their phones before starting work. If you feel that’s too harsh then you could ask employees to switch off their phones and keep them in their bags or pockets.

Although they obviously can’t be switched off, problems with company-issued phones can be remedied by blocking certain apps and sites.

And if phone use is causing major problems in the workplace you should include a rule in your company handbook which says mobile phones should be switched off during working hours. Make all employees aware that this rule exists, then make sure you enforce it!

When employees have been asked to comply with your rules and don’t, disciplinary action may be the only answer.

If you need help with a company handbook or would like advice on issues relating to mobile phone use at work, contact the team or call Moorepay’s employment experts on 0345 184 4615.